Emacs and the Language Server Protocol

Having used Emacs since 2006, I never found a good, reliable, and general enough solution to code completion, symbol cross referencing, go-to definition until I stumbled upon the Language Server Protocol (LSP).

The Language Server protocol is used between a tool (the client) and a language smartness provider (the server) to integrate features like auto complete, go to definition, find all references and alike into the tool.

It tackles the code intelligence problem quite nicely: To support a given programming language with LSP, a language server program must be implemented. When running, all editors and IDEs supporting LSP will be able to employ its features. Adoption is already very good across the field. 1

LSP reduces an \(m \times n\) complexity problem to \(m + n\): the latter refers to only needing a language server for each language and a client for each IDE, whereas the former means that for every language each IDE would require, in most cases, standalone support.

In this article, I will go over the configuration and setup of Emacs for LSP support of C++, Python, and Rust. It is assumed that Emacs version 25.1 or later is already installed and setup for basic usage, and that you’re familiar with editing its config file. Additionally, I use macOS but the installation commands can easily be translated to other solutions and other OSs.

First install the lsp-mode package, which is the LSP client that we will be using:

The initial configuration is very simple: 2

lsp-mode comes prepackaged to use certain available LSP servers, that it will automatically spin up when a mode requests it (by invoking lsp). If LSP servers were already installed at this point, then you would be all set.

Clangd is currently the best working language server for C++ for the projects I work on. Even though cquery comes as a default in lsp-mode, and has more features than clangd, there were times that it would fail to find known symbols for large projects, and both the index generation time and size were longer and bigger than clangd’s.

The first working version of clangd is LLVM v7 but I’ve had the best results with v9 or later (at the time of writing v10 is default in Homebrew), so install LLVM and thus clangd:

Add the following to the lsp-mode config:

It tells clangd that it can use 4 concurrent jobs and to make a complete background index on disk. Without -background-index, it will only keep an in-memory index of the files that are active in Emacs buffers, but to be able to find references and symbols in any project file the background index is recommended. The background index, named “.clangd” by default, is placed at the root of the project.

Most build tools can output “compile_commands.json”. In CMake you write:

Edit 2020-04-21: Improved text referring to the background index and the symlinking of “compile_commands.json”.

For Python, the default language server is pyls:

The default language server for Rust is rls which is installed via rustup. Before installing rustup blindly, first download the shell script and look it over, then proceed:

Skip the rustup installation if Rust is already installed.

Using LSP is easy: open a source code file with one of the major modes associated the lsp hook. If no running language server is handling the particular project, a new one will be spun up to communicate with lsp-mode.

When LSP does not know which project to associate a file, usually the first time visiting a file, it will ask what to do. In this case I’m testing using my vermin project:

vermin.py is not part of any project. Select action:

The following actions are possible:

The minibuffer will display (the PID will differ):

To try out some LSP functionality, take a look at the vermin’s entry point:

Put the cursor at “main” right after import on the second line. We want to find the definition of that function: M-x lsp-find-definition ↵. Voila, that jumps to line 12 of “vermin/main.py”:

The minibuffer will show that it connected to the same pyls instance:

Next, let’s try to find references of parse_args() by placing the cursor on it and
M-x lsp-find-references ↵. 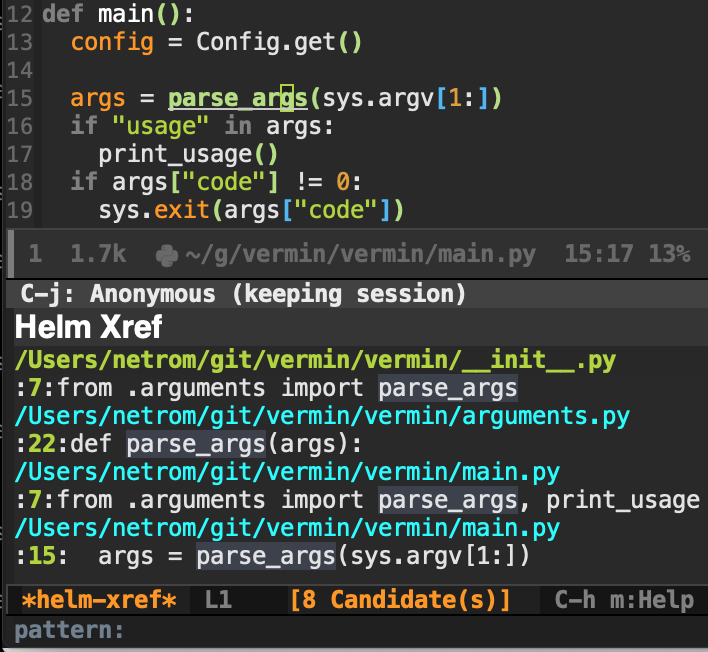 The results are displayed this way due to the helm and helm-xref packages.

Take a look here for more information about extensions and features.

Edit 2019-04-01: My .emacs.d is freely available for the complete LSP configuration, and lots of other stuff related to Emacs.

This section is dedicated to extra features and niceties that I find makes LSP more usable and powerful.

My configuration relies on flycheck being set up:

Another thing that’s really useful, not just related to LSP, is the hydra package, which is described very well by its author:

The Hydra is vanquished once Hercules, any binding that isn’t the Hydra’s head, arrives. Note that Hercules, besides vanquishing the Hydra, will still serve his original purpose, calling his proper command. This makes the Hydra very seamless, it’s like a minor mode that disables itself auto-magically.

In essence, it yields a menu with keybindings in the minibuffer, a hydra, which won’t be shown if the bindings are pressed fast enough.

The following configuration is trimmed down to only show parts related to LSP:

To activate the hydra, press C-c C-l with the cursor placed somewhere relevant:

Edit 2019-04-01: Using helm-imenu instead of lsp-ui-imenu because the former enables easy filtering via Helm.

For completions at cursor, I use company-mode with company-lsp for the purposes of LSP: